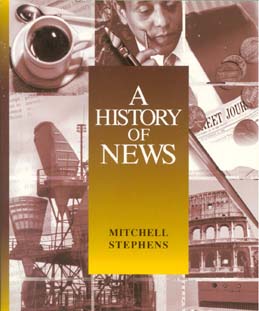 From reviews of A History of News:

"...thorough, scrupulous and witty...[Stephens] has written not an inside-baseball book but one for the general reader; he has given the news and those who disseminate it a degree of legitimacy previously unsuspected by or of them, and he makes a powerful case for treating "the news" as seriously as any other aspect of common human interest and endeavor. "A History of News" is in all respects first-rate, and original, work.

"...a lively and original historical introduction...There is a particularly useful account of the development of reporting...; and at every stage Mr. Stephens's wide knowledge of his subject furnishes him with striking facts and analogies."

"...as a critical historian, his analysis is not only astute, but often eloquent and even downright poignant...a book indispensable for its lucid demonstration that the news, while promising enlightenment, also promotes confusion."

"Stephens has produced a study of the concept of `news' from prehistoric times to our own, and the book succeeds as a thoroughly accessible work about the history, anthropology, economics, psychology and practical techniques of journalism."

"The book's breadth is staggering..."

"...delightful...a straightforward, well-written account, mostly chronological, of how people have communicated over centuries."

"Mitchell Stephens' A History of News combines impressive scholarship and first-rate writing. [It] is a provocative work that should be read by journalism students and practicing journalists."

"...a good possibility for use as a main or supplmentary text for those teaching mass media history. Stephens...has given us an insightful and very different look at our communication past...We do not have another communication history like this....Prof. Stephens' work is based on thorough research, reflects some beautiful writing, and supplies some insightful observations....Perhaps we should make our students dive deeper. Perhaps we should ourselves. This book does."

An investigation of the nature and meaning of news--based on an extended international history of journalism, from preliterate societies through Athens, Rome, China, medieval Europe, Renaissance Europe, revolutionary America and France, nineteenth century England and America, and through the twentieth century and into the digital age.

The book that inspired the history galleries of the Newseum.

To order from Amazon.com

Other books by Mitchell Stephens 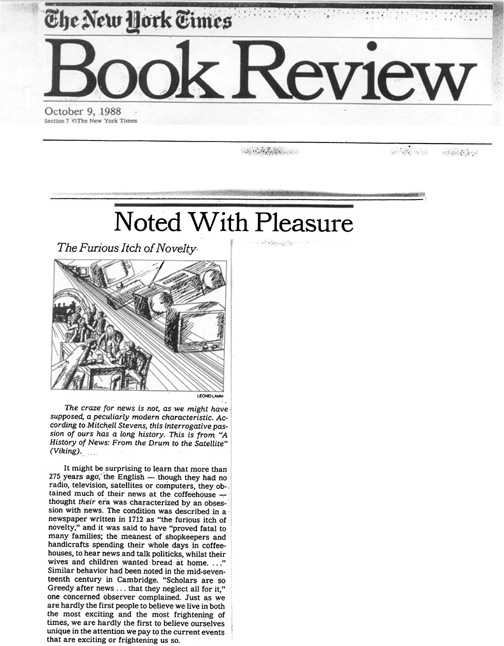 A History of News